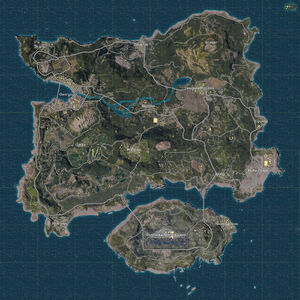 Erangel is the first playable map introduced in PlayerUnknown's Battlegrounds. It is Soviet-era themed with several points of interest. Points from the map that are not mentioned below generally do not contain anything of high value.

Areas noted as high in popularity tend to have more player interactions, with the upside of containing higher quality equipment and potentially easier access to vehicles. Newer players may want to focus on areas that are low in popularity; though the equipment quality is lower, it allows them to adapt to the terrain and get a feel for the game.

Sosnovka Military Base is located on the large southern island. Buildings include vehicle bays, warehouses, and a school.

Novorepnoye is a town on the eastern side of the southern island. Tied to the military, is contains houses and bunkers.

Primorsk is a town on the southwest shore of the mainland.

Georgopol sits in the northwest, guarding the entry to the river cutting through the top part of the map. The port has storage containers and warehouses.

Pochinki is a small farm town located in the southern middle of the map. Plenty of buildings.

Rozhok is found north of Pochinki, near the river. It sits on a hill and is relatively secluded. Typical buildings in addition to a schoolhouse.

Yasnaya Polyana is a large town in the east, near the end of the river. It contains many apartments.

Stalber is found to the northeast. It is mainly ruins and campfires, well away from civilization.

Mylta is across the water and due north of Novorepnoye. It is a small town.

Due east of Mylta is Mylta Power. It contains a high amount of buildings and warehouses, as well as open ground along its exterior.

Lipovka is due north of Mylta Power on the eastern coast. It is a small town with large buildings.

Retrieved from "https://pubg-archive.fandom.com/wiki/Erangel?oldid=4127"
Community content is available under CC-BY-SA unless otherwise noted.